Setting up and reporting GST (New Zealand only)

This support note describes how to set up GST in your company file and report amounts correctly on a GST return.

Setting up GST codes and accounts

Depending on how long you have been using your company file and how the file is set up, some of the following tasks may already be complete.

Default GST codes are already included when you create a company file. These are:

These default GST codes are likely to be the only codes you need to use for transactions in your company file, but if needed you can create new GST codes as follows:

There are several GST liability accounts used for tracking GST collected and paid. If you selected a default accounts list when you created your company file, you will probably have these accounts set up already.

If you do not have GST accounts set up already, you need to create the following accounts:

Set up accounts for recording GST collected and paid

All default GST codes automatically have an account assigned for recording GST collected and GST paid. This means when a GST code is assigned to a transaction, the amount of GST (collected or paid) is automatically recorded against the applicable GST account, for example GST Collected account (for sales and receive money transactions) or the GST Paid account (for purchases and spend money transactions). For more information about GST tracking accounts, see Set up GST accounts below. 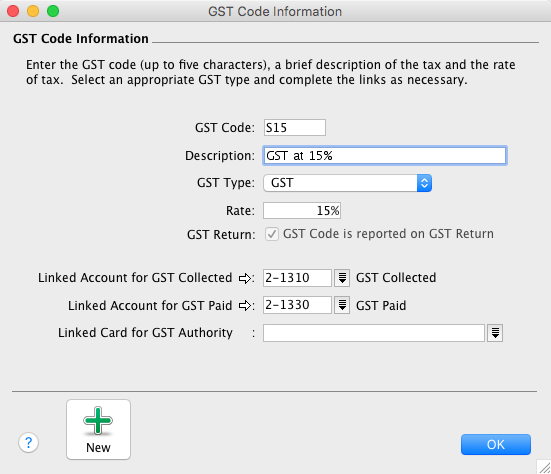 To accurately report GST on your GST return, all transactions you record must have a GST code. This means all relevant accounts, customer and supplier cards, and items need a GST code assigned to them. Then when you use these customers and suppliers in a sales, purchase, spend money or receive money transaction, the GST amount is automatically recorded according to the applicable GST account.

The S15 GST code is assigned by default when you create any of the following:

You can change the default GST code if you need to.

To check if any transactions have been assigned an incorrect tax code, you can print the GST [Detail] report before preparing your return. This report details all the transactions you have recorded in the period and groups them by tax code. For more information see Reconcile GST amounts using reports below.

Preparing and reconciling the GST return

When you prepare your GST return, you need to select how you report GST. This is known as your GST accounting basis. You will either report on a Payments (cash) basis or Invoice (accruals) basis. These are described as follows:

Payments (cash) basis: You report GST collected and paid at the time of receipt or payment. For example, you make a sale for $100 on 01 August but don't receive the money until 20 September. The GST will be reported as collected on 20 September.

Invoice (accruals) basis: You report GST collected and paid at the time of issuing or receiving a tax invoice, before an actual payment is made. For example, you make a sale for $100 on 01 August but don't receive the money until 20 September. The GST will be reported as collected on 1 August.

Before preparing your GST return, make sure you select the correct setup information, including: 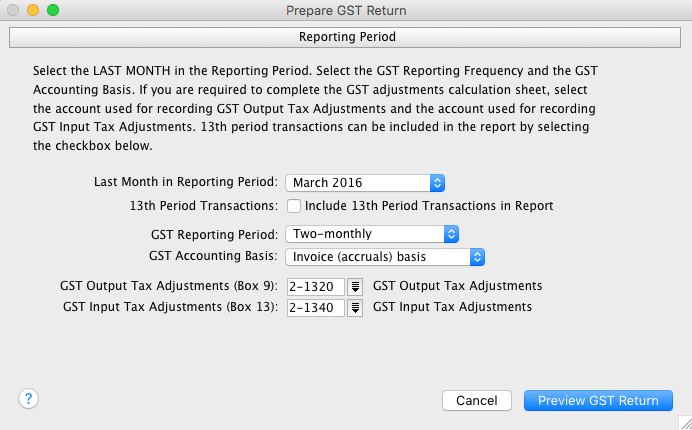 Click Preview GST Return to view or print the amounts you are reporting.

If you use an earlier software version, use the GST Summary report to view GST amounts recorded in transactions, and compare the amounts against the balance of your GST accounts for the period.

The basis on which you report GST determines which reports you should print to reconcile your GST return. The reports are classified as either Payments or Invoice reports. When printing a report, make sure you select the same date range as the GST return reporting period. 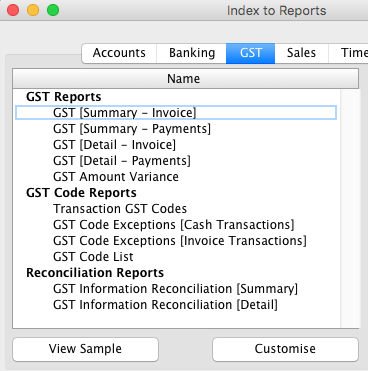 The GST reports are listed under the following sub-headings:

GST Reports: These reports list GST amounts incurred and charged in transactions for the period. You can use these reports to check that transactions had the correct GST code assigned to them.

Recording a journal entry for the GST return

After you have prepared and reconciled your GST return, you need to create a journal entry to record the amount of GST you owe or are owed (Accounts > Record Journal Entry).

The journal entry will create a debit in the GST Collected account and a credit the GST Paid account for the amounts recorded on the return. The difference is recorded in the GST Payments/Refunds account. 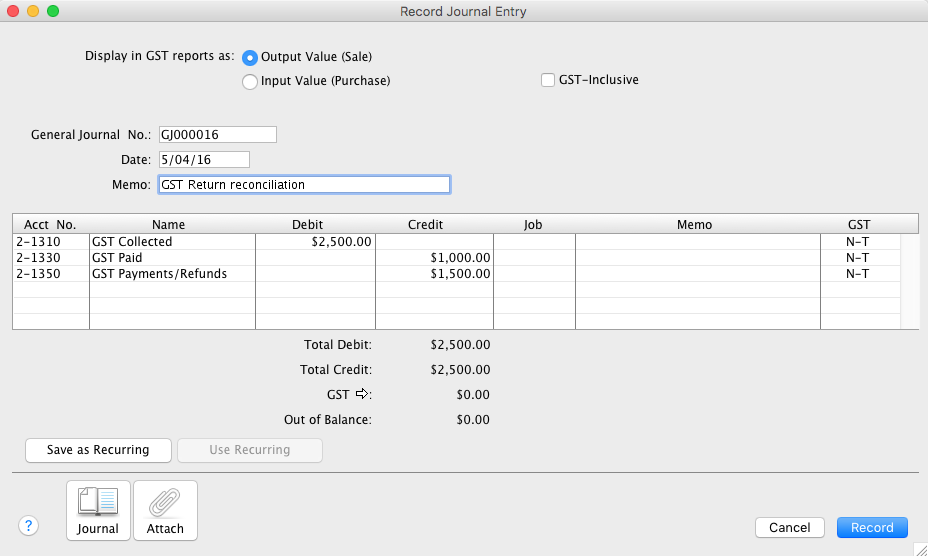 Your GST Collected and GST Paid accounts are also reconciled (cleared) of GST amounts recorded in the return period.

For more details on this, see Paying GST and clearing GST accounts.

Out of Balance in Tax/GST Information Reconciliation reports