See ATO link for more information on this label

This schedule can be pre-filled. For more information on pre-filling tax returns, see Pre-fill Manager.

About Foreign Pension and Employment Income

If the taxpayer received income from a foreign pension or annuity, or income from foreign employment, that income must be included in the income tax return even if it is held overseas for the taxpayer. This income must be included in assessable income even if tax was taken out in the country from which the income came. Foreign income that is exempt from Australian tax may still be used to work out the amount of tax to be paid calculated on an Average rate of Australian tax applied to the other income (s23AG).

If you have a PAYG Summary - foreign employment, this income and the tax paid must be entered at item 1 Salary or wages. Tax will pass those values to the holding dialog at item 20 label U to be used in the calculation of any foreign income tax offset in the difference between the foreign tax paid and the Australian tax payable on that income.

Do NOT include in this worksheet:

All foreign income, deductions and foreign tax paid must be converted to Australian dollars before the return is completed.

What the taxpayer may need

Examples of pensions and annuities that fall into this category are age and superannuation pensions paid from the United Kingdom, Italy and Germany.

If the country paying the pension or annuity has taken tax from the payment, and the pension or annuity is also taxable in Australia, a foreign income tax offset may be claimed where the taxpayer is not entitled to seek a refund of the foreign tax from that country. This refund may be allowed under the terms of an agreement between Australia and the foreign country to prevent double taxation.

Alternatively, if the pension or annuity is paid from a country with which Australia has a double tax agreement the taxpayer may be able to arrange not to have tax withheld from the pension income in the country of origin.

If, in the current year, the taxpayer received a lump sum payment of foreign pension that relates to an earlier year, there may be entitlement to a tax offset. If such a payment was received, include it at Other Income item 24 on the tax return. Do not include it at this item or in the worksheet.

Use the Tax Overseas Pensions worksheet (ove) to convert payments and integrate totals to the relevant return labels.

From the data entered the worksheet will calculate both Assessable and Net Foreign income and return it to the correct labels in the main return and any foreign tax paid will be passed to the foreign income tax offset calculator.

If the pension or annuity received is taxable in Australia, enter the details in the fields provided. If it is not taxable, do not complete this item.

If the taxpayer is not going to claim a refund of foreign tax from the country that paid the pension or annuity, a foreign tax credit may be available.

For the current year debt deductions, such as interest and borrowing costs, are not deductible for the purposes of this calculation. If the taxpayer has incurred debt deductions earning foreign pension or annuity income, this must be included at Item D15.

Item 2 – Pension or Annuity with an Undeducted Purchase Price

If the taxpayer earned any foreign employment income while working overseas, other than a lump sum payment on termination of foreign employment, or from a non-resident superannuation fund, that is not exempt from tax, use the worksheet to enter the income and deductions against that income.

Foreign employment income is income from overseas such as salary, wages, commissions, bonuses or allowances.

The foreign income may be exempt from Australian tax on the basis that it falls under:
a) a privileges and immunities agreement or a law covering persons connected with international organisations
b) an exemption for the pay and allowances of members of the Australian Defence Forces.

If the salary or wage is exempt because of these reasons, do not enter this income in the worksheet as it does not have to be included in the taxpayer's taxable income.

If the income is exempt other than for the reasons above, complete Item 4 of this worksheet.

If the salary and wages is partially exempt, complete Item 5 of this worksheet.

Your foreign employment income that is not exempt under step 1 may still be exempt from tax, but. even if it is exempt, it is still taken into account to work out the tax on your other assessable income.

Income from self-employment and contracts is generally not exempt from tax.

If the foreign service was directly attributable to any of the following, then it does not have to be included:

your deployment outside Australia as a member of a defence force or a police force by the Commonwealth Government, a state or territory government, or an authority of such a government, or

the activities of your employer in operating a public fund that is an international affairs deductible gift recipient, or

the activities of your employer, provided your employer is a prescribed institution located or pursuing objectives outside of Australia, or

the delivery of Australian official development assistance by your employer?

The taxpayer's salary and wages may be exempt due to the following conditions:

Worked on a project approved by Austrade,

Paid foreign tax on the foreign employment income, or

Had a specific agreement or memorandum of understanding with the government of the country where the work was done and a double tax agreement was in operation.

If the period of continuous employment in the foreign country was 90 days or less, the foreign income is NOT exempt from tax.

Enter any partially assessable salary and wages income and the worksheet will calculate the amount to be included at both Assessable and Net Foreign income labels.

Enter the number of days overseas and the worksheet will calculate the relevant amount to be included in taxable income.

This is the sum of all amounts of foreign tax paid on foreign annuities, pensions and foreign salary or wages not subject to PAYG withholding.

The summary at the bottom of the worksheet advises the amounts that have been totalled for each of the labels at item 20.

Tax Pre-fill is dependant on available ATO data. Validate the Tax return by pressing [F3] for a list of the imported values and any errors before lodgment.

The Tax Pre-fill section includes any amount of exempt foreign salary or wages contained in the ATO Pre-fill Report. The fields only become visible once pre-fill is done. 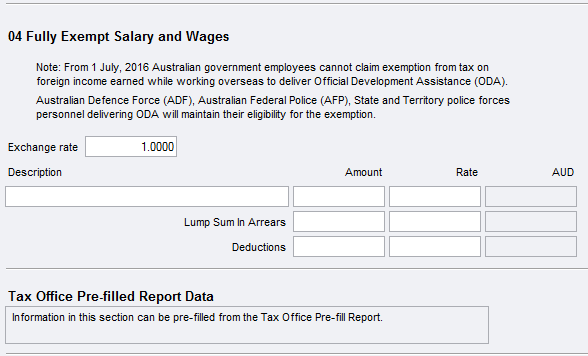 The amount entered will be passed to the income test item, IT4 Target foreign income to be included at label V in the same way as previously occurred.

If the amount pre-filled is not fully exempt, then you will need to delete the entry and re-enter the amount at item 05 - Partially assessable salary not subject to PAYG in the ove.

Did you find what you were looking for? *

What are you looking for help with? *

e.g. How to delete an invoice.

Overall, how satisfied are you with this help centre? *

Just the online help, not phone support or the product itself.

What was the reason for your rating?

Copyright © 2018 MYOB Technology Pty Ltd. All rights reserved.
This help topic is provided as a guide only, in accordance with our Legal Disclaimer.
For specific taxation or accounting advice, please consult the relevant tax authority or regulator.