A 'Wildcard' is a character which you can use when filtering a report to represent one or more characters. This can help quickly filter your reports to find that data you need.

The two wildcards available are the asterisk (*) and the question mark (?) and their use is explained below.

To select only accounts whose numbers begin with 1, enter 1* in the Selected field in the Report Customisation window for the Account Transactions report.

When you display the report, only accounts whose numbers begin with 1 will be included on the report.

Click this image to see the asterisk wildcard in action. 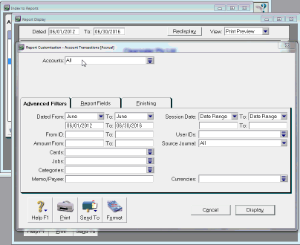 You can use the asterisk in other locations in an account, item or job number in the Selected field, as well. For example, if you have several items whose numbers end in SVC (to indicate the items are service items), you can enter *SVC in the Selected field to print a report that includes only the items whose numbers end in SVC.

The question mark wildcard allows you to restrict a report even further than the asterisk. Use the question mark to limit your report to elements that contain only a specific number of characters.

For example, say you want to print a Job Transactions report for the Caldwell Corporation. All Caldwell job numbers are three characters long and begin with the letter C, but you have other jobs that start with the letter C and you don't want those jobs to appear on the report. In the Selected field of the Job Transactions report's Report Customisation window, enter C?? to limit the report to three-character jobs that begin with C.

Like the asterisk wildcard, the question mark also can be used in other locations in account, item, purchase, sale and card names.

Transactions in the 13th period