How satisfied are you with our online help?*

Just these help pages, not phone support or the product itself

Why did you give this rating?

Anything else you want to tell us about the help?

Sometimes we get questions from customers who’ve noticed that different parts of Ace Payroll say a single employee has several  different amounts of leave owing - particularly when there is a difference between the Leave Owing report and the Termination Pay window.

If you have noticed this discrepancy, don’t worry, the software is tracking leave correctly.

The number of days is different because of the way Ace Payroll keeps track of employee leave, and the way leave is paid when an employee is terminated.

Employees accrue at least 4 weeks of leave per year, and those 4 weeks become available all at once on the anniversary of their first day of work. Some employers agree to let their employees take this leave before the anniversary date, but are not legally required to.

Ace Payroll tracks leave by dividing it into two categories:

Annual Entitlement is leave that employees have become entitled to every 12 months on the anniversary of their first day of work.

Current Year Entitlement is leave that employees are accruing over the course of the year, but have not become legally entitled to. This is an estimate, which Ace Payroll provides to help employers keep track of employees’ leave.

Ace Payroll calculates leave entitlements automatically, so there is no need for you to understand the formula. The calculation is as follows:

For example, if it has been 92 days since Melanie’s anniversary, and she is entitled to 20 days of leave per year, the calculation will be:

This means that Melanie has accrued 5.04 days of leave so far this year.

If this sounds confusing, don’t worry - Ace Payroll handles it for you.

How leave entitlements are displayed on different reports

Melanie Jones has 17 days of Annual Entitlement because on her last anniversary she became entitled to 20 days, and has since used 3 of them.

She also has 5.04 days of Current Year Entitlement. This is the amount of leave she will have accrued (but not become legally entitled to) at her next pay period. 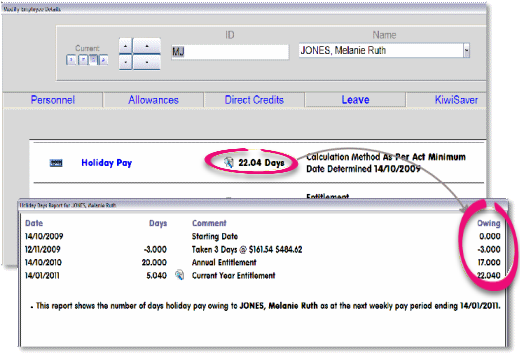 The Leave Owing report shows the amount of leave an employee is owed as a single number, which is the total of their Annual Entitlement plus their Current Year Entitlement.

This means that the number may be slightly different, but this is not a cause for concern.

When you terminate an employee, their Annual Entitlement is replaced with Full Year Days Owing - both just mean the days they are owed since their last anniversary.

This is because the Holidays Act says that employees are to be paid 8% of their gross income for the time they have worked since their last anniversary (or since they started, if they have worked for less than a year). 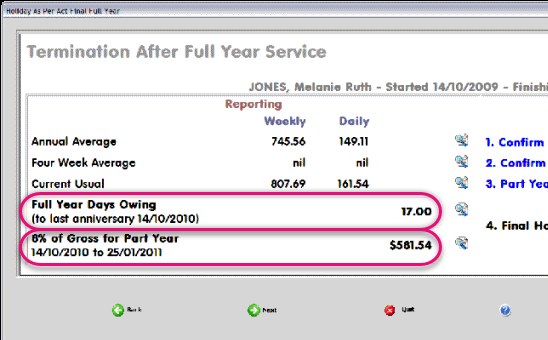